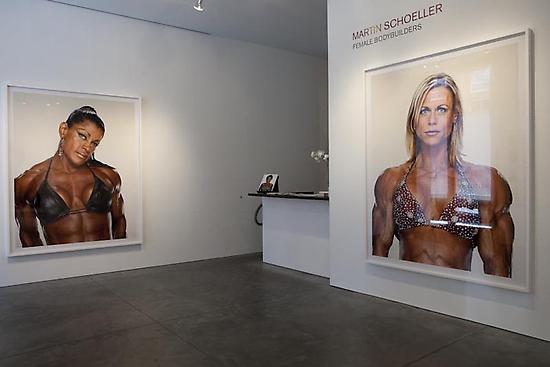 Hasted Hunt Kraeutler is pleased to announce an exhibition of photographs of female bodybuilders by MARTIN SCHOELLER.

Schoeller’s best known works are close up portraits without the usual artifices or digital manipulations of media and fashion photography, previously exhibited at the gallery in 2006 (Close Up) and 2008 (New Work). These portraits are highly-detailed, colorful investigations of a face and the character that animates it. The subjects are celebrities and non-celebrities, including people who live outside of western culture, exhibited on a level platform, challenging the viewer’s notions of celebrity, beauty, value and honesty. The German-born Schoeller is influenced by August Sander, the Bechers and their disciples, as he investigates intensity and closeness on the one hand and leveling and objectivity on the other. He continues their questioning of what the medium of photography can reveal about its human subjects in the present day when images of celebrities proliferate even more and digital manipulation is taken for granted.

Schoeller began to photograph female bodybuilders when they were at competitions for their sport in 2003 and continued the project for five years. He writes, “from the first Polaroid, I was struck by the multi-dimensional complexity of the portrait.” Ironically, the female bodybuilders are passionate about achieving an ideal body, but their ideal is alien to the majority of our image-conscious society. Schoeller writes of the female bodybuilders, “they challenge the boundaries of not only the shifting, maddening, and ruthless standards of the female beauty industry, but of what consitutes ‘(un)natural.’ For many observers, the outsized development and hyper-articulation of these ladies’ every muscular detail present an affront to acceptable standards of femininity, of beauty, of taste.” However, these women present themselves as extremely feminine- they wear makeup and do their hair- with the result that at first viewing, their feminine heads appear disconnected from their muscular bodies. They conform in most ways to normal societal standards- many are married, raise children, and pursue careers. More than one of the women state that bodybuilding helps them to have higher self-esteem. They consider themselves in some sense to be artists: they use metaphors of “sculpting” their bodies and “perfecting” their “creation[s].” Like many artists, their work goes unappreciated and unrewarded. Their male counterparts, who conform more easily to ideals of masculinity, receive financial rewards and publicity that the women do not.

Schoeller has commented on how these subjects make themselves vulnerable to scrutiny, both in their every day lives and especially when they allow themselves to be photographed. The viewer of these photographs will feel this when confronted by these images because of the visceral responses they provoke- whether it is admiration, repulsion, fascination or confusion.

Martin Schoeller (born  1968, Munich, Germany) has exhibited throughout the United States and Europe and lives and works in New York City. His photographs have been exhibited and collected by the National Portrait Gallery in Washington, D.C. and published in two books, Female Bodybuilders (Pond Press, Brooklyn, 2008) and Close Up: Portraits 1998-2005 (TeNeues, 2005).