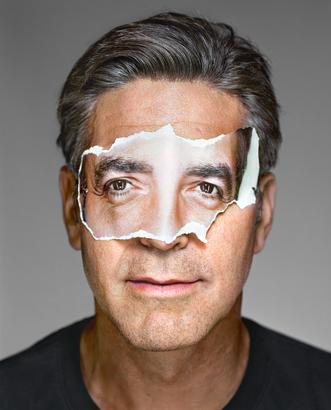 of
Inquire about this work

Celebrated photographer Martin Schoeller's distinct method for creating his striking large-scale portraits involves getting up close and personal with his subjects. Characterized by his models' unflinching, direct gazes, which meet the eyes of the viewer and then hold them for eternity, his Close Up photographs, often presented in larger than life sizes, offer raw and revealing glimpses into his subjects, exposing them in a way that feels almost unforgivingly truthful.

Schoeller (b. 1968) has captured such famed faces as Jack Nicholson, Cate Blanchett, and Angelina Jolie, political figures including Bill Clinton, and incumbent president, Barack Obama. In his tightly cropped representations, his models face him squarely, even despite the blaring studio light he turns in their direction.  His method, he has explained, involves taking many, many photographs until he manages to catch his subject at an honest moment, ideally when his or her guard is down—and he thereby exposes in them something viewers would not otherwise witness. “The pictures that survive over the years are ones where you see something of somebody that they normally wouldn’t share so easily,” he says. “Something intimate, honest. I don’t believe you can capture the soul of someone, but there are pictures that are more honest and ones that are less honest.”

Born in Germany, the artist has lived in New York for many years and has worked as a contract photographer for the New Yorker, allowing him access to many of his subjects. His rigorous and systematic approach to image making echoes the grand tradition of German typographies pioneered by Bernd and Hilla Becher, and he often exhibits his photographs in neat, orderly grids that belie the human content they contain. Schoeller's photographs are minutely observed studies of the human face—its features, wrinkles, gestures, and expressive capacities—his images share a history with those created by Chuck Close, the contemporary art world’s master of photorealist portraiture.

Although he has photographed musicians, Olympic athletes, world leaders, scientists, war heroes, celebrities and even presidents, Schoeller maintains that his favorite kind of work is to document people who have not had their pictures taken countless times—and perhaps to even take their first ever photograph. In that vein, a 2008 series of images depicts members of the Amazonian Pirahâs, a rarely depicted indigenous tribe of hunter-gatherers whose current population is numbered at a mere 360, placing them dangerously at risk of vanishing. There is a rawness and an excitement to the almost anthropological experience, he says, of capturing the image of little-known peoples and cultures, which produces the most evocative, compelling images.

Martin Schoeller's photographs have been exhibited by such renowned institutions as the Smithsonian National Portrait Gallery, the Cooper-Hewitt National Design Museum in New York, the Naples Museum of Art in Naples, Florida, and the EMP Museum in Seattle, Washington. Numerous monographs of his work have been published, including Portraits (teNeues, 2014), Identical: Portraits of Twins (teNeues, 2012), Martin Schoeller: Stern Portfolio (teNeues, 2009), Female Bodybuilders (Pond Press, 2008) and Close Up (teNeues,2005).

I’m Ready for My Close – Up
View More

Martin Schoeller: The Truth Behind the Portraits
View MoreDownload PDF

From Steve Carell to Jeff Koons, Celebrities Get Their Closeup with Martin Schoeller
View MoreDownload PDF

The Top Seven Happenings in Art, Design, and Beyond
View More

The Photo That Made Me: Martin Schoeller, New York 1998
View MoreDownload PDF

Shutter Genius: How to Take the Perfect Portrait
View More

Do These Identical Twins Look The Same To You?
View More

Portrait of an Artist
View More

READY FOR HIS CLOSE-UPS
View More

UP CLOSE AND PERSONAL WITH THE STARS
View More

UP CLOSE AND PERSONAL AT THE PORTRAIT GALLERY
View More

MARTIN SCHOELLER: READY FOR THEIR CLOSE UP
View More

GETTING A BIG HEAD
View More

MARTIN SCHOELLER PHOTOGRAPHS ON VIEW AT THE NATIONAL PORTRAIT GALLERY